The sound of dreams realised, joy unconfined, your favourite yesterdays returning and the promise of tomorrow. Merry Hell have risen to become festival favourites, their albums finding favour with critics, broadcasters and music fans alike.

MERRY HELL is a band founded on the ever evolving Folk tradition – music made by the people and shared by the people. Though our hearts and souls are tuned to the songs which came before us, we bring you new words and music forged from our own experiences, from the lows and the loves of our lives. Our art is energy and our hope is unity. Our pleasure is to please: let the audience be the acid test and let the music speak for itself.

MORE INFO:
Founded in their native North West of England, Merry Hell is an eight-piece folk-rock band with a history, a pedigree and a bright future. They have risen to become festival favourites, their first two albums finding favour with critics, broadcasters and music fans alike. They are continuing to develop an enviable reputation for the quality of their song writing, recorded work and live performances.

The band was forged in the smouldering embers of 90s Folk/punk band, The Tansads. Following an emotional series of reunion concerts in 2010, its members chose to tread the boards under a new name, ‘Merry Hell’, in order to reflect their new impetus, new hopes and, most importantly, new songs.

While Merry Hell retains a nucleus of five former Tansads members, brothers John, Bob and Andrew Kettle (guitar, mandolin and vocals respectively), along with keyboard player, Lee Goulding and drummer Andy Jones, the addition of vocalist, Virginia Kettle (wife of John), has helped create a new identity, purpose and spirit, in their music. She took little persuading to trade in her solo singer-songwriter past for a future in the band. Her prolific, ingenious and insightful song writing is one of the focal points of Merry Hell’s recordings and live performances – her presence has perfectly complemented a group which has taken particular pride in penning original material (Bob, John and Lee have also been consistent contributors of new songs).

Fortune favoured commitment: the day after the first 4-song demo was finished, the band’s manager, Damian Liptrot, attended a music business conference, where a copy of the demo was picked up off the floor by Steve Heap of Mrs Casey Records as he swept up after the event. He played it in his car on the way home and, a quick phone call and an amicable meeting later, the band had a recording deal.

Merry Hell -October, 2011 saw the release of their debut album to universally excellent reviews, including top ratings in many publications and inclusion in several album of the year listings. As the word spread, the record achieved a stint in the Number 1 slot on the Amazon ‘recently popular’ chart in the Folk/Rock category.

Merry Hell – John and Andrew KettleMerry Hell developed their reputation as live favourites throughout 2012, enjoying appearances at many prestigious festivals, including Big Session, Towersey and Wickham, support gigs with old friends, Oysterband, and the mighty Bellowhead plus the beginning of their (now annual) Merry Helloween event at The Citadel, St Helens. As if that wasn’t enough, they released their first video and launched an offshoot project, ‘Merry Hell Acoustic’, in which a slimmed-down version of the group enjoys the intimacy and atmosphere of Folk Clubs around the country. The band were delighted to finish off the year with a nomination for a Spiral Earth Award in the ‘Best Band’ category.

The second album Head Full of Magic, Shoes Full of Rain was released in May, 2013 to similar critical acclaim, gaining 5 star reviews, Album of the Year nominations and awards. Increasingly widespread radio airplay, especially on the specialist folk/roots shows, was also gratefully received.

Merry Hell – LiveBassist, Nick Davies, has since offered his rock-solid sense of rhythm and perceptive musicianmanship to the service of the group. The current line-up was completed by fiddle player, Neil McCartney, a school friend and teenage bandmate of the Kettle brothers. He returned home to Northwest England after a musical career which saw him tour the world with ‘The Big Geraniums’, playing with the likes of Bob Dylan and Van Morrison and achieving a Top 3 single in their native Ireland. He’s had big boots to fill, as the violin virtuosity on Head Full of Magic, Shoes Full of Rain was supplied by the legendary Dave Swarbrick.

Merry Hell – LiveDuring 2014, Merry Hell played over twenty festivals, including a highlight support slot to Richard Thompson at Towersey, undertook its first national tour in Spring, a further tour in October, plus a ten date acoustic jaunt around the folk clubs and arts centres of Northern Britain. This was accompanied by the release of two self-produced videos and an EP previewing tracks from the new album, The Ghost In Our House and other stories… In addition to this feverish activity, the band was at the centre of ‘The Armistice Pals’, a project instigated and coordinated by its manager. This involved over forty folk artists and over a hundred more voices from the wider folk community, brought together to commemorate the centenary of the outbreak of World War One and to celebrate the inspiration of Pete Seeger through a re-recording of ‘Where Have All The Flowers Gone’. The project gained national and international support and has recently been the winner of two awards. 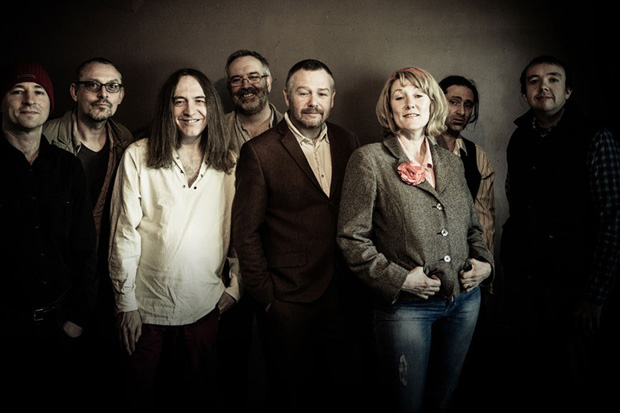