A Female Led Musical Comedy Band that performs laugh-out-loud funny songs, but also heart-breaking poignant songs, The Polly Morris Band is making its name with performances of shows across the South of England where the audience needs to “Expect the Unexpected”.

If you could imagine the love child of Bill Bailey and Victoria Wood, that would be Polly Morris. Her observational songs about such things as family, relationships or the perils of sending an email to the wrong person, are songs that you can instantly identify with. These are peppered with more thoughtful acoustic numbers that are reminiscent of Karen Carpenter.

The Songs are written by Polly Morris who has been likened to “The Flanders and Swann of our day, a cultural commentator with a bulge firmly in her cheek!” (David Gillard MBE – Daily Mail). They are gaining increased radio airplay across the country with the recent release of the 6th Polly Morris Studio Album. This is a band that you may well hear before you see them.

The Polly Morris Band comprises vocals, guitar, harmony vocals, saxophone, flute, accordion, bass, double bass and piano. The musicians are Polly Morris, Mandy Stansfield, Kate Hunter, Brian Harries and Joel Solomons. However, you never know whether you might be surprised by someone new! Other musicians who have been known to play with the band are Paul Thomas, Leonardo McKenzie and Sean McFetrich.

The latest Polly Morris EP “ Random Clothing and a Song” featuring the single “ ‘Too Big For Me’ Jeans” is out in June! 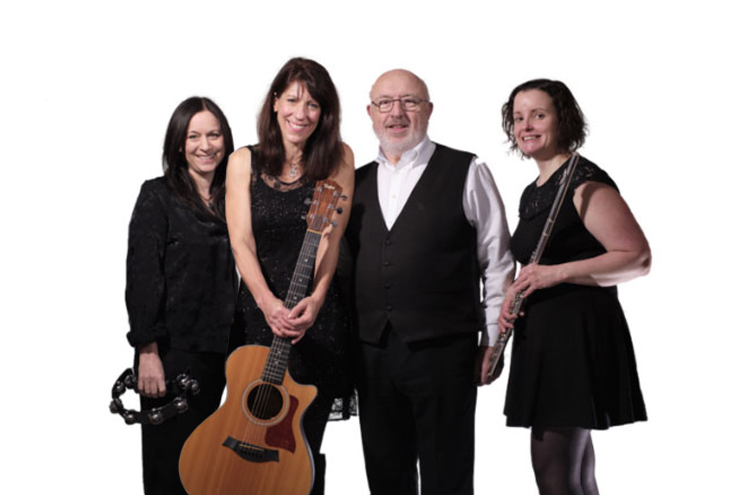